Rice Research Institute of Iran was visited by Dr. Asgari, the chairman of the parliament’s agriculture commission, and his accompanying delegation

Rice Research Institute of Iran was visited by Dr. Asgari, the chairman of the parliament’s agriculture commission, and his accompanying delegation

On Thursday, July 9, 1401, the Rice Research Institute of Iran was visited by Dr. Mohammad Javad Asgari, Chairman of the Parliament’s Agriculture Commission, and his accompanying delegation. Dr. Hosseini, Director General of Rice Research Institute of Iran, and his colleagues in the research departments hosted the visitors. Dr. Hossieni, director-general of Rice Research Institute of Iran reported on the last research activities of RRII such as breeding programs, agronomy packages, second crop in the rice-based cropping system, rice production promotion plan, using smart technologies in rice production, and food security in rice. She pointed out the latest introduced cultivars such as Gilaneh, Resh, Anam, Tisa, Tolo, Gilar, and Kian and gave explanations about the characteristics of each of these cultivars, and emphasized cross-breeding activities that fit the needs of the rice farming community and the tastes of farmers and consumers. In addition, the adaptation plan of high-potential hybrid rice cultivars, under investigation in cooperation with the Ministry of Agriculture, was visited, and it was emphasized about hybrid cultivars and their characteristics, and the need to screen for early-ripening and adaptable cultivars suitable for Iran’s climate. Dr. Hosseini, director-general of Rice Research Institute of Iran further stated the cultivation of new early varieties and drought tolerant cultivars as racial solutions to reduce water consumption in paddy fields and expressed her hope that with the plan to improve rice production and food security and contract cultivation, the penetration rate of new improved cultivars will increase and increase in domestic rice production in the year of knowledge-based production and job-creating in accordance with the Supreme Leader’s intentions. She also stated about agricultural solutions such as adjusting the agricultural calendar, growing healthy and strong seedlings, periodic irrigation, controlling harmful factors such as weeds, pests, and diseases, managing the farm in drought conditions, soil and plant nutrition, and scientific findings regarding the mechanization of harvesting. In the continuation of a report on the process of collecting, revising, and evaluating the genetic reserves of the rice system, then jump in the production of elite seeds as one of the most important inputs in rice cultivation was presented, and the farms related to the genetic reserves and seed production were visited. He also presented a report on the joint research activity with the Science and Technology Park of Guilan province regarding the Internet of Things and the evaluation of accurate data to make the paddy field more smartening. 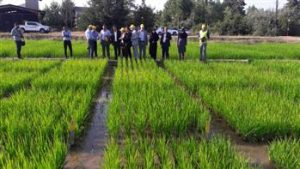 In the following, Dr. Mohammad Javad Asgari, Chairman of the Parliament’s Agriculture Commission, considered “food security” as one of the serious issues of today’s world due to droughts and regional conflicts, and stated: Agriculture is one of the sectors with full potential in our country. He emphasized the role and importance of rice in the table of the people and expressed hope that with the practical results of the research, we will witness an increase in domestic rice production and its supply in the country.

In the end, Dr. Asgari and his accompanying team visited the exhibition of the latest research achievements of the rice research institute of Iran.