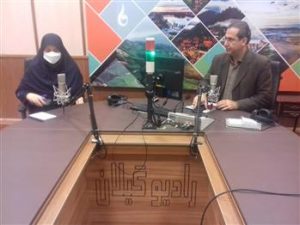 General of Rice Research Institute of Iran attended on Darich (Window) program of Guilan Province Radio Channel (Baran) of the Islamic Republic of Iran Broadcaster on Sunday, October 19, 2021. In answer to a Radio host about the rice sector challenges, introduced the RRII’s past, present, and future plans to increase rice production in the rice-growing area of the country, and the latest research achievements of RRII.

In this 45 minutes program, Dr. Hossieni Director General of Rice Research Institute of Iran has discussed and answered all questions about Climate change and its consequent effects on water shortage in the rice-growing season, and scientific and practical solutions for sustainable rice production in the current condition. She also pointed out the future research plans of RRII on climate change.

In the first part of this radio program, an agricultural meteorologist has explained and analyzed the most important climatic factor (rainfall) in the coming autumn and winter of Guilan province and its related basin.

In response to a question about the importance of rice in the food basket of the Iranian people, she said: Rice is the world’s second most important cereal crop. Next to wheat, rice is a staple food for Iranian people (particularly, rice-growing area of the North)  and plays a vital role in food security at the national level. So we look at this crop very strategically. To respond to the country call,  the RRII coordinates the development of a rice strategy for the region. This call was made in the backdrop of the food demand and increased attention being paid to the development of the rice sector by national governments and research agencies.

Breeding programs focus on introducing new varieties of rice that are tailored to the farmers’ needs and consumer tastes and preferences. To cope with this challenge we tried to provide new varieties to farmers more quickly. In this regard, during the last 3 years, 6 new rice cultivars have been introduced to the paddy community by the RRII. The new rice varietal introduced are classified into three groups: 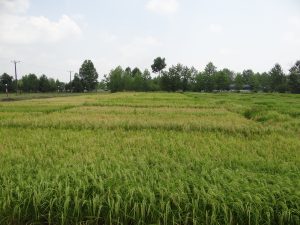 She also added that the monitoring of the cultivation of new cultivars Kian and Anam in different parts of the province revealed that the farmers were completely satisfied with the cultivation of these two cultivars. Farmers who had cultivated Kian cultivar reported that this cultivar tolerates water shortage and very good cooking quality. The farmers who had cultivated the early and good quality Anam cultivar also expressed their satisfaction with the tolerance of this cultivar to lodging, the high yield, and the very good cooking quality of this cultivar.

Dr. Hossieni Director General of Rice Research Institute of Iran: The Rice Research Institute Iran has organized various training courses, and workshops (In-person and online), publishing extension booklet and bulletins, technical reports, posters, and infographic design, and also the formation of a group of specific researchers to monitoring rice paddy fields, research and extension projects, and on-farm and etc., play a vital role to increase rice grain yield. In this regard, we must use capabilities, opportunities, and abilities in all media.