Every year, the staff of the rice research institute of Iran (RRII) commemorates the national Women’s Day and Mother’s Day on the 20th day of the lunar Islamic month of Jamadi al-Thani, which marks the birthday anniversary of Hazrat Fatimah Zahra. Hazrat Fatimah (PBUH) commonly known as Fāṭimah al-Zahrā (d. 11/632) was the daughter of Prophet Muhammad (PBUH) and Lady Khadija (PBUH) and the wife of Imam Ali (PBUH). She is one of the Fourteen Infallibles in Twelver (Ithna’ashari) Shia belief.

Media: During a video conference on Wednesday with a group of eulogists on the birth anniversary of Hazrat Fatima Zahra (SA), Leader of the Islamic Revolution Ayatollah Khamenei elaborated on the unique and incomparable character of Hazrat Fatima Zahra (SA) and underlined her outstanding role as the precious daughter of Prophet Muhammad (PBUH), Imam Ali’s wife and fellow as well as the mother of unprecedented figures such as the grand progeny of Prophet Muhammad (SA). As the Leader mentioned, under the Islamic Republic, Iranian women’s achievements in social, cultural, artistic, scientific, political, and economic fields have been unprecedentedly outstanding. In other words, motherhood and adherence to Islamic codes are not in contrast with women’s progress. Hazrat Fatima Zahra (SA)’s personal and social life clearly indicates this fact. The Leader of the Islamic Revolution declared: “We are proud of the view of Islam and we protest the Western view on women and lifestyle.”

The statement of the Director-General of RRII, Dr. Hossaini Chaleshtori for this event:

The 20th of Jamadi-al-Thani is the birthday of Hazrat Fatemeh (PBUH), which was called Mother’s Day to honor mother and motherhood. The symmetry of the “Dahe-ye Fajr” (10 days of Dawn) celebration and the blessed birth of Hazrat Fatemeh (PBUH) is an auspicious event. We wish all Iranians good health, especially the women of our land. The efforts of women in all fields of science, research, society, and culture are admirable. The Rice Research Institute of Iran, in turn, congratulates these happy days and wishes of progress in all fields. Insha’Allah 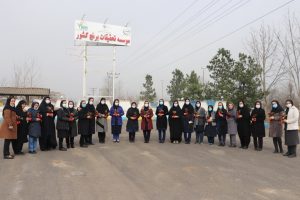