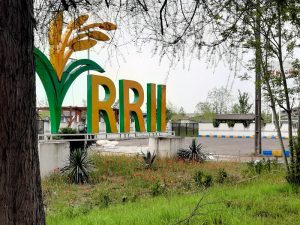 The Rice Research Institute of Iran’s mission and purpose target to improve the life quality of those who depend on the rice sector through rice-based agri-food systems and the environmental sustainability of rice production systems. This mission (solving farmer constraints with deep research) has taken place through collaborations with both advanced research institutes and national partners around the rice-growing areas through the participation of farmers in the improvement of new cultivars and monitoring the distribution coefficient of newly introduced rice variety in the pioneer farmers’ farm by multidiscipline researchers. To achieve these missions, the Rice Research Institute of Iran will take place several farm days per year. 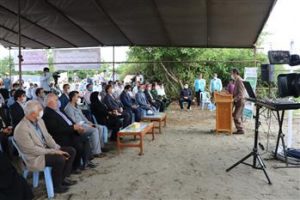 The first rice farm day of the 2021 rice-growing season focused on on-farm participatory breeding for drought stress-tolerant and early mature rice varieties based on the participation of researchers, and the experience and needs of farmers. This ceremony was held on July 17, 2021, in Lamer village of Asalem of Talesh city of Guilan province in compliance with health protocols of Covid-19, participated by Dr. Zare, Governor of Guilan Province, Mr. Almasi, Head of Jihad Agricultural Organization of Guilan Province, Dr. Hossieni, director-general of Rice Research Institute of Iran, Mr. Shahkooi, Governor of Talesh, a group of regional managers and agricultural experts, academic members of  Rice Research Institute of Iran, some of the military commanders of the region and a number of leading rice farmers.

The ceremony began with the recitation of verses from the Holy Quran and the National Anthem of the Islamic Republic of Iran. 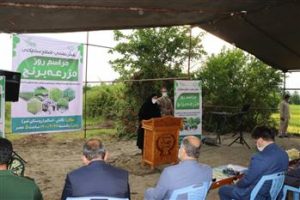 The first speaker of the ceremony, Mr. Engineer Agha Jamali, Head of Jihad Agriculture of Asalem city briefly reported about the main crop and problems of paddy fields in the region, especially water scarcity. The region’s paddy fields (more than 90% of arable land) are not part of the Speed ​​Road Dam irrigation and drainage network and the water used in the paddy fields is supplied by rivers. Therefore, they have faced drought stress due to insufficient supply of irrigation water during the current growing season and we strongly need to use research findings such as drought-tolerant rice varieties and proper irrigation interval to manage and overcome the lack of irrigation water.

Dr. Hossieni, director-general of Rice Research Institute of Iran, was the second speaker at the ceremony, announcing the new strategy of the Rice Research Institute in introducing new rice cultivars, Through the joint cooperation of this institute and agricultural jihad organizations, with the focus on participatory breeding of promising lines for each region.

She also added that the Rice Research Institute is a nationwide institute that tries to carry out its duties at the national level for each region in the rice-producing provinces with the aim of introducing new rice cultivars and providing agricultural packages, based on a combination of researchers’ knowledge and leading farmer experiences to meet the needs of farmers. Thus, the institute’s field efforts during the last three years relied on the field of participatory breeding projects, monitoring the new released cultivars distribution, extension- research projects, monitoring pilot farms throughout the country, pilot farms of soil and plant nutrition in Guilan and Mazandaran provinces, and rice production assistants’ plans. The achievements of all of these activities were issued in the related farm day in each region.

By referring to the implementation of the participatory stability project to select new cultivars suitable for each region announced that we hope the findings of these projects in this region can solve the irrigation water shortage. On the other hand, the monitoring of the introduced rice varieties in recent years assessed the level of acceptance of farmers and examining possible problems in order to eliminate problems and make decisions for future research. 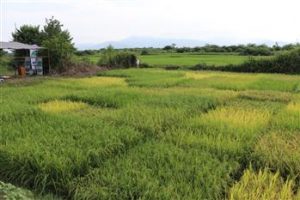 The participatory breeding projects of promising lines for the western region of Guilan province, which has been implemented with about 14 lines in the form of a compatibility plan, was considered an effective and safe step in realizing this new strategy and expressed hope, due to water shortage in Asalem region through a short growth period and drought tolerant and tolerant to lodging.

Dr. Hossieni also continued:  by testing the trend of increasing the distribution coefficient of improved cultivars, especially Anam in this region, we hope to find an effective and sustainable solution to reduce irrigation water consumption and reducing the growth period and see promising results in the near future. In addition, this cultivar is classified as drought-resistant with high cooking and eating quality. In the end, he said that the efforts of the Rice Research Institute focus on improving the conditions of rice cultivation, improve the yield and quality of this strategic crop and increase farmers’ incomes. 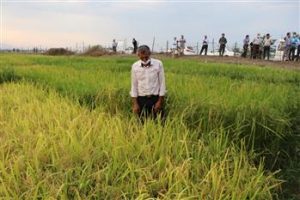 Mr. Borhan Shakoorian, the pioneer farmer in rice production, was the next speaker at the rice farm day ceremony. He had cultivated Anam, a newly released early mature and high cooking and eating quality variety for the past three years with the collaboration of, Dr. Allahgholipour, the breeder of Anam. He said that the main concern of all rice farmers is to receive better cooking quality and early mature, lodging resistance cultivars compare to local cultivars. He also pointed that Anam is an early mature and we can harvest it 15 days sooner than local rice varieties and consequently the farmers can save more irrigation water. Also, Anam grain yield is around 6 tons per hectare and can enhance the farmers’ income. Therefore I decided to cultivate about 4 hectares of my own paddy fields. Last year, I sold the white rice of Anam at a higher price than the local cultivar. Now I thank the rice research institute of Iran and its hard worker researchers who introduced the Anam cultivar, and I strongly advise the other farmers to cultivate Anam.

The governor of Talesh also thanked the farmers and the managers and experts of the big family of agriculture sector and also appreciated the support of the esteemed governor of Guilan for his plans to solve the problems of water shortage in the region. 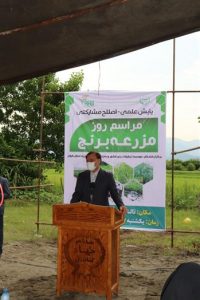 Dr. Arsalan Zare, Governor of Guilan Province, the last speaker of the ceremony, thanked the stakeholders for carrying out scientific and valuable activities of the Rice Research Institute of Iran and pointed out: Continuous research work to introduce more suitable and sustainable cultivars for each climate conditions, climate changes, resistant to Drought and water stress are also expected to increase productivity, quality, and quantity of production. He expressed hope that the Rice Research Institute will continue to work hard and persevere with farmers this year and next year, according to the plan. The governor of Guilan praised the valuable actions that are the result of the joint efforts of farmers, the Rice Research Institute, and the agricultural jihad organization. In conclusion, he expressed the hope that with the existing cooperation and synergy, we will see an increase in the production of agricultural products, especially rice, this year and in the coming years.

At the end of the ceremony, Dr. Zare, Governor of Guilan Province, and the accompanying delegation visited the project of participatory breeding of promising lines and the plan to increase the distribution rate of the Anam cultivar. Dr. Hosseini provided scientific explanations based on the latest findings of the research projects. At the end of the ceremony, Dr. Hosseini, Head of the Rice Research Institute of Iran in the open-air Q/A part of the rice farm day answered the questions of local rice farmers, extension services agents, experts, and members of the media.

Previous
Rice Research Institute of Iran (RRII) attended the 36th session of the Regional Conference for the Near East (Regional Stakeholder Dialogue- a virtual meeting)
Next
Participatory Plant Breeding (PPB) project of early mature rice lines has been visited by Dr. Hossieni