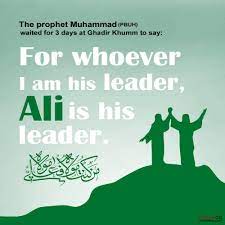 Eid al-Ghadir is one of the most important festivities for Shias and some Sunnis. It is celebrated on the anniversary of the day when Prophet Mohammad (AS), on God’s order, appointed Ali ibn Abi Talib, the first Shia Imam, as his successor and the leader of Muslims.

Eid al-Ghadir has many messages and teachings for Muslims. One of them is that Eid al-Ghadir shows us that religion is comprehensive and has a set of consistent beliefs, rituals, and rites rather than a number of isolated rules.

The second point is that Ghadir has some culture of coexistence in it which we know today as unity.

Another point is that Ghadir highlights the position of Wilayat (leadership), which is vital to all Muslims. We read in verse 30 of Surah Al-Baqarah, “When your Lord said to the angels: ‘I am placing on the earth a caliph,’ they replied: ‘Will You put there who corrupts and sheds blood when we exalt Your praises and sanctify You?’ He said: ‘I know what you do not know.’”

Hence, the world was created to draw a perfect system of salvation and if there were no intermediary to link man to God, there would not have been such a creation. So the system of Wilayat is one that links people to God and it was introduced on the Day of Ghadir.

Congratulations on the Eid of Al-Qadir to all lovers of the prophet (PBUH) and his Ahlol-Bait (sa).